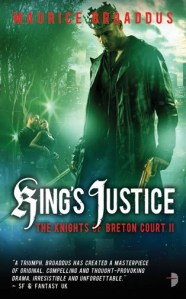 King’s Justice follows King Maker, the début novel from Maurice Broaddus. King Maker was an enjoyable adaptation of the Arthurian myth. Using the Arthurian story as the template for a novel isn’t particularly new and it is to the authors credit that he succeeded in melding the Arthurian story with a gritty urban tale set in Indianapolis to create a compelling read. It wasn’t perfect. It introduced a large number of characters (of course, it was the first part in a series) and in doing this I think that when the climax of the novel was reached, things felt a little unbalanced. This didn’t kill my enjoyment of the novel, however, and I was looking forward to the second novel in the series.

King’s Justice follows King James White (son of Luther) as he attempts to end the war between the drug gangs in Indianapolis by calling a parlay. Most of the main characters in the novel are named for players in the Arthurian legend and often play similar roles, so Merlin is Merle, King’s advisor. In the novel, Merle has being having visions and is spurring King White on to fulfil his destiny.

I think that it is possible to read this novel without having read the first in the sequence, but it does help to know what has gone before. Most of the characters are all fairly well established as this novel begins. The pacing of the novel is helped a little, also, given that Broaddus doesn’t have to spend so much time introducing all his characters and giving them back-stories. Mind you, I have to confess that I did still find the climactic parts of the novel slightly jarring, and this is given that the author, though not peppering his prose with violent descriptive language and gratuitous swearing, certainly doesn’t shy from the more unpleasant aspects of life in his city. To be clear, I have absolutely nothing against swearing* or violence (the former in real life and art and the second in art only) but I think that they should always be deployed in a natural manner.

Actually, I think that part of the reason for this could be because it is mostly at these climactic points in the novel where the fantastic elements of the novel really come into play. I realise that “urban fantasy” is quite possibly more of a marketing description than it is anything else. But, well, this is a novel set very much in a city with some fantastical elements, so I’ll accept that on at least some levels the description is fairly accurate. This might, however, be what makes things jar slightly for me. And this could be an entirely personal thing, so don’t let it put you off. The fantastical aspects of the novel are, most of the time, in the background. Indeed, at times – for example police investigations – they pass unnoticed.

The police, it seems, are investigating and attempting to deal with (unfortunately) very real criminal and social problems, for example. I don’t know if I’m reading the intentions of Maurice Broaddus correctly here, but this is an aspect of the fantastical side of the story which I appreciated. The part of Indianapolis that the two policemen, Lee and Cantrell, is almost alien to them. They seem mostly unaware that there are supernatural forces at work.This would fit with the idea that people outside of communities, such as depicted here, fail entirely to understand them.

This further fits with ideas about the problems faced by communities, such as those depicted in King’s Justice. They are essentially invisible to the wider community, except when the authorities decide that they need to deal with criminal activity. Of course there is, further, a racial element to this as the communities that are suffering tend to be populated mainly by black people. Despite the fact that the people that live there are those most in need of help, the ones that will suffer the most, there is the slight tendency to regard the people as entirely homogeneous and to ignore that there is a wider social problem which needs to be tackled.

This is further explored in the relationship between Lee (a white policeman) and Cantrell (his partner, black). Lee isn’t exactly a bad person, but he tends not to see shades of grey in his morality. He is a little chippy about how he fits into the police department. Cantrell is his new partner at the start of the novel and he isn’t too keen on working with him as he regards Lee as a bit of a peckerwood (which probably isn’t totally unfair). There is, however, a nice scene where they work together extremely well in an interrogation.

“‘Where were you on September 3rd?’ Cantrell asked.

‘Man how am I supposed to remember,’ Mulysa said. A high pitch slipped into his tone. ‘Where were you?’

‘The man raises a good point,’ Lee said. ‘September was a long time ago.’

‘Maybe if something happened that day.’ Cantrell looked up toward Lee.

‘Let’s try something easier. What happened earlier tonight? Noticed one of your bitches…’

‘… had a little blood. What are the odds that it will be a match to someone in the system?’

‘I don’t know, detective.’ Lee casually ambled toward Cantrell as if to whisper conspiratorially with him. Though for Mulysa’s benefit. ‘Fine upstanding citizen like Mr Cheldric here, surely only associates with like-minded innocents.’

‘On top of the world.’ Cantrell matched his stance, fully hammering at Mulysa now.”

This section comes at a point when the two detectives are really working well together; putting side personal differences to work towards the same ends.

As indicated, the novel is concerned with King White’s attempts to unite the warring gangs. We see the problems that he will have in doing this by following the main characters in the run up to the meeting that he is attempting to have. This demonstrates the huge task that he has ahead of him. All of those involved have their own problems and are often attempting to carve their own niche (or enhance their position). In this the story is (as has been suggested elsewhere) not dissimilar to the TV series The Wire handled drugs gangs, smuggling and policing. It’s perhaps not quite so accomplished, but then very little is. In fact, it’s worth noting that much of the novel is concerned with the day to day travails of the characters and some of their motivations. The fantastical elements do take a back seat in the narrative through most of the novel.

One thing that did niggle a little is that, because there is such a large cast and this is the second in a series, I did feel that some characters – who one feels are set up to be of no little importance (Merle springs to mind) – become slightly peripheral given that there are choices that have to be made by the author. Having said that, I’m not a huge fan of bloated novels, so I’ll not complain too much.

For the most part, I enjoyed King’s Justice. It’s faults are more to do with the ambition of the novels than anything else and Broaddus writes well, so they aren’t at all catastrophic. I look forward to the next in the series!

*If you’ve had the pleasure/misfortune to have met me, you’ll be able to confirm this.

Available from Amazon and The Book Depository

This entry was posted in Review and tagged fantasy, Maurice Broaddus, novel. Bookmark the permalink.